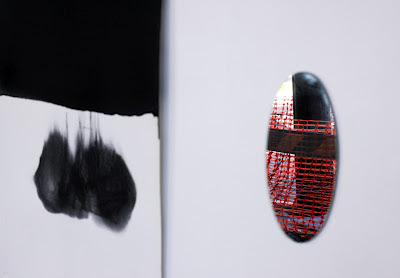 The term 'smoke and mirrors' refers to the kind of trickery originally used by magicians as a way of deceiving the audience. Billowing smoke would be used as a fascinating screen to mesmerise the audience; the multiple reflections of mirrors made it difficult to perceive the difference between the artificial and the real.

This installation of Pat's plays with those devices with a very acute understanding of the site. SLOTs window can often pose a difficult scenario with its heavy reflections immersing the very activity of the street within an artist's work. Pat has used this layering of reflections, whereby the mirrors, placed as punctuations on the back wall, hone and isolate the street's activity into fragments of stillness and clarity.  They offer a connectivity for the viewer, but also metaphorically position the viewer within this narrative of the displacement and journey. 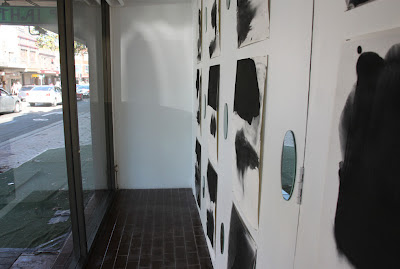 These drawings were taken from photographs of refugee vessels.  But at the same time they are simple images of tiny craft being 'lost at sea'. The skies seem endless, the seas seem vast, and the mirrors cast our own reflections back at us. Furthermore, the mirror seemingly perforate the gallery wall like portals to a promised land glimpsed beyond. There is a wonderful energy between the velvety charcoal moments and the mirrors, their regular meter across the space speaking to an endlessness of the tale it presents. 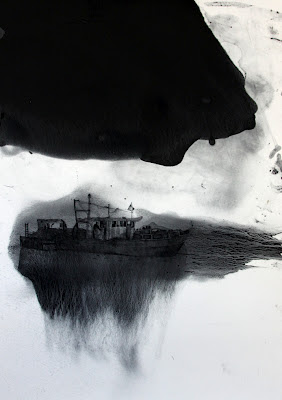