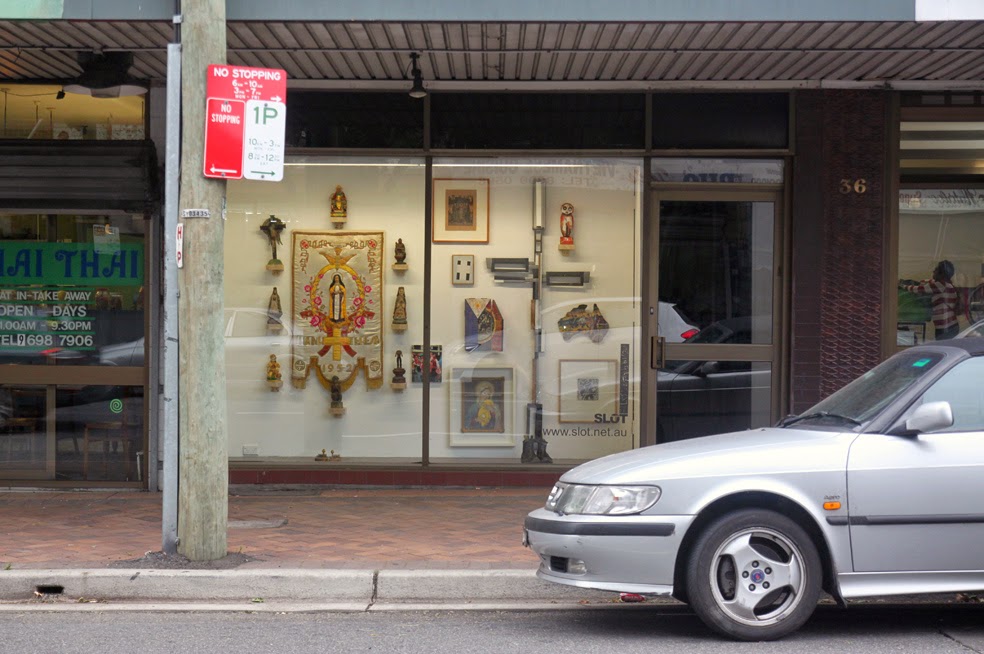 My own interest in religious art began in Manila while watching the annual Black Nazarene procession - when an ancient figure of Christ is paraded in the street through such frenzy that each year several people are crushed to death. After the figure of Christ passed I was surprised to see another making its way through the crown, then another, and another. Patiently it was explained to me that it is the image that is sacred not the object, and while there are many objects, there is only one image.

This idea inverts our usual understanding of art where worthiness is measured by an object's artistic merit or monetary value irrespective of its subject matter.

In our exhibition that contrasts religious and secular art, colonialism emerges as a common concern. That religious art was employed as an instrument of colonization in South East Asia is demonstrated by the banner of Thanh Teresa that was made for a Saigon (Ho Chi Min City) church in 1952, while the Viet Minh were fighting for Vietnam's independence from France. The banner opulently celebrates the French Saint Therese of the child of Jesus, a nun surrounded here by Vietnamese symbols of good luck and firmly amalgamated with the Fleur-de-lis, a symbol that has united the Holy Trinity and the French nation since the Middle Ages.

In contrast to this arcane art predicated on a single absolute truth, SLOT offers meta-religious art - an unholy hegemony of Nationalism, leftist politics and abstraction - in essence Modernism.

And while it might be tempting to identify Modernism as a religion, it would entail ignoring a central ideal - the single word shouted by Indonesia's Joko Widodo at the conclusion of his inauguration speech, "MERDEKA" - or Freedom - it is an elusive thing in South East Asia, yet its presence and its absence ask the central question - what we are to become?

Originally from New Zealand, Wendy Bornholdt has exhibited installation works widely in NZ and the UK. Bornholdt was drawn to window works in 2006 when she devised a small work for the Dunedin Public Art Gallery that described a girl who liked to look in fish shop windows. She has since executed window works in NZ and here in Sydney. 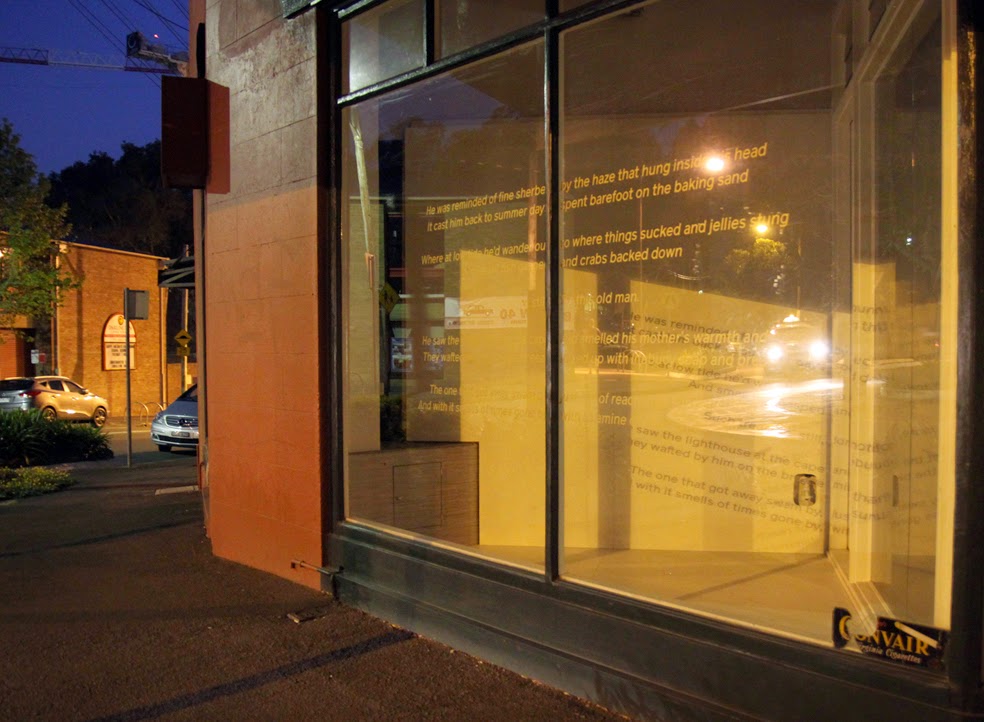 Gold - made for DIP (Darlington Installation Project) - is her fifth window work, and addresses beautifully the window's vision to address site through installation. Early next year she will install another work at DIPs sister gallery SLOT on Botany Road.

Simply, Gold is an old man's reflection on his childhood days at the beach. For several generations at least it also evokes a mood reflected by the work's site, an old corner shop. A fragment of a sign hints at it; a bit of history documents it, but mainly it's a memory that we can smell as readily as we can smell the sea at a distance through time - it's nostalgia.

Here the text floats on its window and is overlaid by reflections of the street and from within, including the roundabout opposite that Wendy describes as being evocative of a lifebuoy - a lifebuoy that is reflected in her text.

Wendy's work is an accordion of associations - half prose, half graphic - that is "properly" installation art, designed to catch our eye as it wanders the street with an offering as tangible as a flight of fantasy.


DIP is a partner window project of SLOT. It is located on the corner of Abbercrombie Street and Golden Grove, Darlington; about a ten minute walk from SLOT. The space is made available by Lloyd Suttor, who runs a bed and breakfast at the location.
Posted by SLOT gallery 30 comments:


Jayanto's tea bags hang with beauty, delicately stained by dried tannin into a kind of exoticism that we are quick to think of as Asian. Jayanto is Indonesian. But he's just as quick to point out that the tea bag was invented somewhere in America sometime in the 70's and that tea is of course Chinese. Indeed this artwork reaches across cultures - it's an artefact of the perverse colonialism that is the modern world. 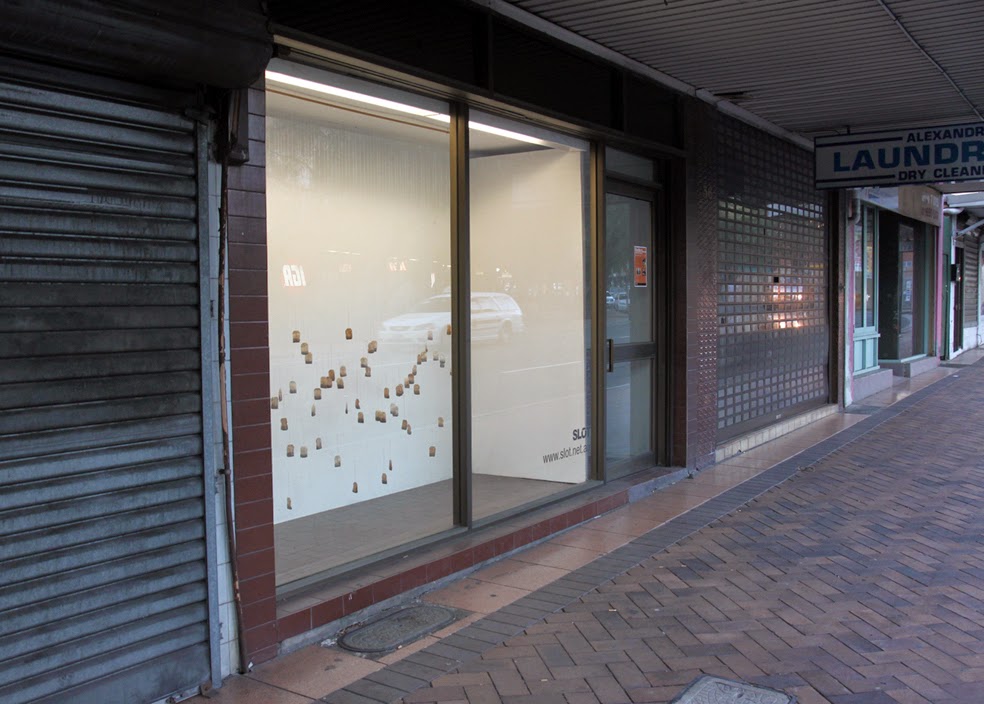 "I created conversations with used tea bags, which I began collecting in 1997. Each tea bag...contains a memory of either my family or my friends...every tea bag tells a story of daily life's grievances and joys. I embrace their history and intertwine it with my own. I encourage viewers to recognise flesh, mind and spirit in order to create individual meaning."

This is how Jayanto described his tea bag installation to Slot director Tony Twigg, continuing, "Nothing is ever wasted and all materials of waste contain their unique history. They serve as tactile reminders of the past and give meaning to the present."

On the day Jayanto installed this piece, and over yet another cup of tea, his conversation turned to Indonesia's famous Black May Race Riots that occurred in May 1998, triggered by food shortages and mass unemployment that eventually led to the resignation of Indonesia's President Suharto and the fall of his government. The main targets of the violence were the ethic Chinese, however, most of the people who died in the riots were the Indonesian looters who had targeted the Chinese owned shops. Jayanto plucked the title of Billie Holiday's immortal song of racial intolerance Strange Fruit to sum up his piece.

Jayanto's fruit dangles for us; artfully melodious in their arrangement they await our mediation as whispers.
Posted by SLOT gallery 4 comments: